This scratchboard illustration by Beth Krommes from “In the House In the Night” (written by Susan Marie Swanson) “really represents the flight of imagination that this exhibition represents,” says guest curator Nina Maurer.

Starting May 6, the Portsmouth Historical Society will open the first-ever exhibit that celebrates the legacy of children’s books created in northern New England. “Imagine This! The Power of Picture Books” will feature original artwork by over 30 illustrators, as well as a book-making station, reading nook, play space, toy theatre, storytimes, weekend workshops with artists, pop-up events across the city and more.

“It’s a radical idea for a historical society, that we meet people where they first encounter art — in the pages of children’s books,” says guest curator Nina Maurer. “This is a groundbreaking exhibit for children and families.”

Portsmouth, she adds, is an ideal location for such an exhibition, as New England is “the birthplace” of picture book illustration, she says. Many beloved classics were published in Boston during the early to mid-1900s, with many writers and illustrators hailing from New England, such as Maxfield Parrish, who lived at “The Oaks” in Plainfield, New Hampshire, from 1898 until his death in 1966, and illustrated a number of works, including “Mother Goose in Prose” by Frank L. Baum. And then there’s Robert McCloskey, whose darling ducklings are still making their way through the Boston Public Garden. Some of McCloskey’s original sketches of “Blueberries for Sal” will be on display, depicting the moment Sal (who McCloskey modeled after his daughter) and the bear first notice each other.

Today, this rich tradition of exceptional children’s books has “really spread to Portland, Maine, and beyond, and we’re halfway there,” says Maurer. “We have this great wealth of children’s books that have been produced in the region, and we want to look at this art form that has been shaped over more than a century and see what it has become. If you look at the history of children’s book illustration, it’s rooted in Boston and flourishing here today. We are really delighted to be able to introduce the public to this aspect of the region’s heritage. If they come out of it knowing that it’s part of our heritage, that’s wonderful.

Classic illustrations by artists such as Parrish, McCloskey, NC Wyeth, HA Rey, Dr. Seuss and Eric Carle will appear alongside those by contemporary illustrators such as Grace Lin, Chris Van Dusen and Mo Williams. Of course, New Hampshire’s beloved Tomie DePaola will also be represented. In total, more than 100 illustrations, including recent works reflecting diversity in children’s books, will inspire adults and children to explore the creative process and the joys of reading.

While reminding visitors that many of the books they cherish are part of New Hampshire and New England history – it’s at the Portsmouth Historical Society, after all – it’s also about showing people that children’s books are both meaningful and powerful.

“The foundations of literacy, as well as visual literacy, are found in children’s books,” says Maurer. “The first time we encounter art in our lives is in the pages of children’s books.” And those first encounters probably happen when someone reads to you. “Shared reading is so emotionally powerful,” adds Maurer. “When you’re physically together and you focus on the words together, they sink and then lock into a very deep place. We find that people remember it all their lives in a very positive way.

The exhibition also aims to recognize talented artists. Children’s books may seem simple, but creating them requires a great deal of skill. “Illustration is a legitimate art form – it’s an art form unto itself,” says Maurer. “He was relegated to a lesser status due to a lack of understanding of the form and the amount of work needed to be successful.”

Finally, says Maurer, she hopes it will bring relief to families after the many hardships caused by the pandemic.

“Part of that story is about wonder, about self-discovery, about reaching unseen worlds,” she says. “We think it’s so important for children and families to renew their wonder as it has atrophied over the past two years. Spring is an opportunity to indulge again in this sense of discovery, curiosity and wonder.

A few ways to continue to encourage a passion for curiosity, learning, reading and creating art

Maxfield Parrish’s former home in Plainfield is privately owned, but is available to rent for overnight stays and get-togethers through Airbnb ($225 a night). If you’re looking for something a little more economical ($10 for adults, free for youth 15 and under), St. Gaudens National Historical Park is located close to Cornish and offers similar views of the landscape and Mount Ascutney which inspired Parrish. The park includes the grounds, home and studios that once belonged to the famous American sculptor. Parrish and Saint-Gaudens were friends as well as neighbours, and Parrish was among the notable artists who helped form the Cornish colony.

The park grounds and trails are open year-round during the day, and the visitor center, galleries, and historic buildings are open daily from Memorial Day through October 31. To see nps.gov/saga for more information.

Margret and HA Rey, authors of the ‘Curious George’ children’s books and former summer residents of Waterville Valley, were people of many talents and interests, including the arts, history, exploration and preservation of the natural world , gardening and more. Today, the nonprofit Rey Center of Waterville Valley honors its spirit of discovery by expanding the public’s understanding of science, art, and nature with programs for children and families. To visit thereycenter.org for information on upcoming events. 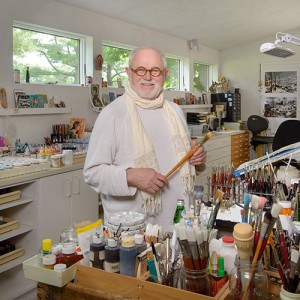 Beloved children’s book author and illustrator Tomie dePaola from New London died in 2020, but his influence on children’s imaginations lives on in more than his beloved books. The Currier Museum of Art in Manchester is the steward of the Tomie dePaola Art Education Fund, which offers free tuition to children and young people as part of the museum’s studio art programme. To visit currier.org for more information on the fund and the wide variety of courses available for adults and young people.